"For a Healthy Generation" - two workshops 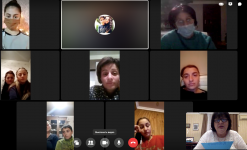 Two online workshops were held within the framework of the small project “For a Healthy Generation” of Pakhulani Women's Support Center (Tsalenjikha municipality). The workshop was devoted to the topic of bullying, stereotypes that cause conflicts and often turns into violence. It was said that it is necessary to avoid conflicts and live without violence. During the second workshop, the emphasis was placed on the importance of including parents in the educational process in order to create harmonious triangle: student, parent, teacher. It was noted how important it is for the child to have support from the parent when solving problems, as well as the cooperation of parents with teachers. The meeting with the parents was also attended by their children and it was conducted against the background of active discussion.