In WSCs of Senaki, Kutaisi and Khurcha (Zugdidi Municipality), the consultations of psychologist were attended by 31 women.
“Circle of emotions in family” – this was the topic of emotional and impressive meeting. There was a real circle of emotions.
The fact is that circle of emotions is not so easy in life. What should be done to avoid bad mood?
We should stop negative emotions and be more positive.
-Fill your life with positive impressions, keep smiling and love yourself – this was the message for women.
The project is implemented with the support of the organization Brot
für die Welt – Evangelischer Entwicklunsdienst (Germany) 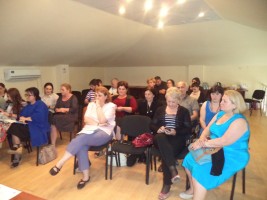 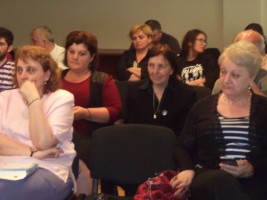 International organization of migration and association “Dea” held a meeting in Kutaisi, Center of Democratic Engagement on: “Employment of the persons with disabilities and advocacy”.
Fund “Sukhumi” invited people of this category, with whom it works for the given moment in partnership with national network of women NGOs. They learned about international experience of employment and challenges, existing in Georgia.
It should be mentioned that people with disabilities are actively involved in the public processes of the city. 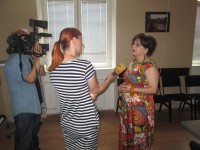 On July an dordinary meeting of Kutaisi GAC was held. How do the participants evaluate network meeting of Kutaisi, Ozurgeti, Batumi and Senaki GAC, conducted by the fund “Sukhumi”. What did they gain and how will they use experience – the GAC members expressed their opinion round these issues.
The most significant result for them - creation of the Network of GACs, which will raise the level of coordination between different GACs for achieving common goal. The meeting was a good opportunity to meet, exchange experience, that should be reflected in terms of gender aspect in the budgets of four cities.
The members of GAC reviewed the recommendations developed according the results of the study of gender needs. It was decided to select the group that will continue to work on the recommendations. Final version will be presented to Kutaisi Sakrebulo, in order to envisage recommendations in the budget of next year.
The project is implemented with the support
of the UN Women’s Fund for Gender Equality

Workshops in the villages 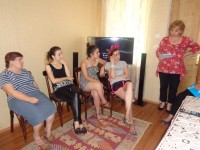 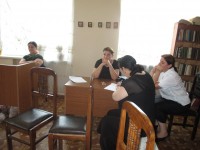 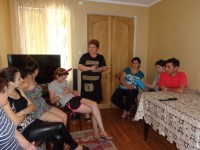 On July 8-15 on the initiative of Women Support Centers of Kutaisi, Khoni, Tskaltubo, Senaki, Poti and Khurcha (Zugdidi Municipality), in nearby villages, a circle of workshops was held on: “gender and gender violence”, attended by 73 people. Participants heard information about gender, talked about women’s rights, gender violence, gave concrete examples and discussed preventive ways.
Participants positively evaluated workshops and mentioned that the women are less informed about their rights in the villages and similar meetings are too important for them.
The meetings were attended by representatives of villages, teachers of kindergartens and schools. The issues discussed on workshops were interesting for men and boys as well.
The project is implemented with the support of the organization Brot
für die Welt – Evangelischer Entwicklunsdienst (Germany)