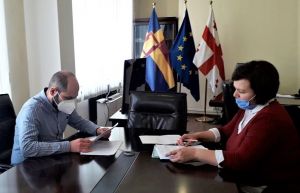 Sofia cannot hide her pride with the result she received. The result of the advocacy campaign on the issue: equipping the bus stop construction with “ramps” (she emphasizes this every time she starts talking about civic initiative).

The representatives of Zugdidi City Hall came, studied the area, recorded the data. According to them, the construction will be installed in the first quarter of 2022. It turns out that very quickly, since this is rarely done at the end of the year. And this women initiative group managed this!

Sofia Tolordava does not want to credit herself with all the success. She claims that the whole community was involved - the women started, and when seeing that the process started the men and youth also joined...

Sofia shared her experience with community members, and they were actively involved in collecting signatures, communicating with the local government. She even conducted workshops on practical skills of advocacy. 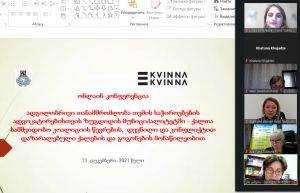 Online conference of the Fund “Sukhumi”: "Local Cooperation for Advocacy of Community Needs in Zugdidi Municipality - with participation of members of the Women Peace Coalition, IDPs and conflict - affected women and girls" was held.

The conference was attended by representatives of the civil sector, municipalities, international organizations, the legislature and the central government.

The meeting evaluated the successful practices and challenges in terms of local cooperation in responding to the needs of citizens. Municipal officials announced their official position on advocacy issues initiated by Women Initiative Groups. They noted that the dialogue initiated with participation of citizens is a precondition for more accountability and responsibility of local authorities. 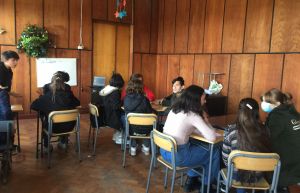 This is the result of the Fund “Sukhumi” advocacy campaign!

A youth space was established in Public School No 12 of Abkhazia (Zugdidi) and is already hosting informal meetings.

On December 15, young activists held a meeting with teenagers on the topic: Violence - Bullying. Participants actively participated in the discussion, discussed and made thematic posters.

Topics for future meetings were identified, activities were planned, including finding resources for material and technical equipment of the youth space.

Advocacy to achieve the goal 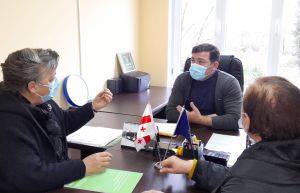 There are 500 IDP and local families in Ingiri community (Zugdidi municipality) - including people with disabilities, women with many children, the elderly. They have to walk and carry hard luggage from the central highway to the settlement, about 500 meters away. So they ask to change the transport traffic.

As part of the advocacy campaign, a petition was prepared, 290 signatures were collected, and a series of meetings were held with the Head of Municipal Transport Service, the Vice Mayor. Audio record prepared with the participation of the beneficiaries was prepared https://soundcloud.com/changetoempower/o4upeicij6rt

According to the authorized persons, the issue will be considered in the next year budget. The advocacy group continues its activities

Meetings in frames of advocacy

Representatives of the Association "Mercury" met with the Mayor and Vice Mayor of Zugdidi Municipality. They talked about the possibility and model of funding services for victims of domestic violence from local budget funds.

According to the Mayor of Zugdidi, after consultations with the relevant services, the details of the service will be agreed. Several interesting recommendations were discussed and the dialogue will continue.

The meeting was held with the aim to advocate the needs of victims of domestic violence - as part of the Women Peace Coalition Advocacy Campaign. 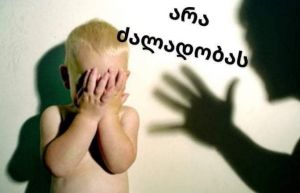 These posters were made jointly by the children and parents and with their sincere messages they condemned any manifestation of violence.

This is how the children, parents and teachers of Ingiri (Zugdidi Municipality) kindergarten "Tsitelkuda" ("Red Riding Hood") joined the international campaign "16 Active Days Against Violence Towards the Women". 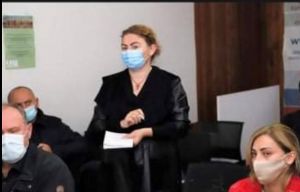 Village Ingiri (Zugdidi Municipality). There is a kindergarten "Tsitelkuda" in the compact settlement of IDPs from Abkhazia, where IDPs and local children study.

The kindergarten has been operating since 1997, with a rent in a non-standard two-storey building and does not meet the needs of IDPs and conflict-affected families in terms of access to preschool services.

The advocacy group collected signatures and submitted a letter to the City Hall requesting the adequate infrastructure for children of 150 families. The group members attended the budget discussion and received feedback from City Hall on the issue raised by them.

In parallel, the advocacy group has created an informal space where kindergarten teachers and psychologists meet parents and hold interesting discussions about the educational process.

Association "Mercury" - in the advocacy campaign 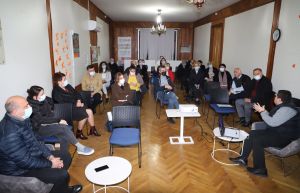 Zugdidi Municipality is one of the first to introduce assistance programs to victims of violence. During the discussion of the 2022 budget, this issue was also discussed with the qualified non-governmental sector. Members of the advocacy group continue to consult with the financial, legal services.

In case of appropriate support, Zugdidi Municipality will introduce another innovation - the use of outsourcing method to provide qualified services to victims

Advocacy of needs of IDP settlements and local population 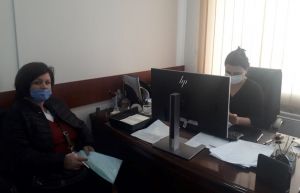 In frames of the Fund “Sukhumi” advocacy campaign, the activists are trying to address the needs of IDP families and the local community in 7 Baramia Street, Zugdidi: Citizens using municipal transport are not provided with bus stops, which causes inconvenience for women (who take care of the family - shopping for the family, going to the pharmacy, carrying children to school, etc.), schoolchildren, people with disabilities, the elderly.

A meeting was held with the Mayor, a representative of the MP Bureau, at the Infrastructure Service. Signatures were collected and the relevant letter was submitted to the City Hall.

Zugdidi: the beginning of the advocacy campaign 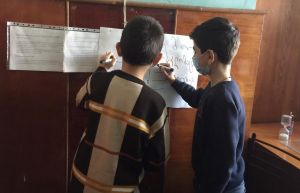 In frames of the advocacy campaign, it is important to work with a long-term prospect in support of IDP youth and conflict victims. In school No. 12 of the Abkhazian Autonomous Republic (in Zugdidi), in cooperation with the administration, the staff and the pupils, there was a willingness to arrange a youth space on the basis of the school so that teenagers could hold interesting meetings, discussions in an informal emviroment and think about the development of entrepreneurial skills.

Within the framework of the project, under the leadership of the activist of the Fund "Sukhumi" Mariam Narmania, meetings were held on the topics: "Ecology and climate change", "Women's rights". Young people were actively involved and had interesting discussions on various issues.