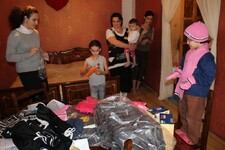 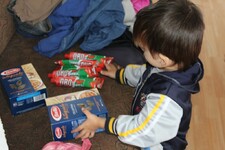 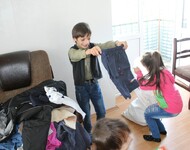 Fund "Sukhumi" with the charitable fond "Karitas" carries out joint actions for women beneficiaries of the support centers.

This time 5 families received clothing, food and hygiene packages. In Senaki gifts were handed over to representatives of the three families, and in Khoni – to two large families - with 5 and 9 children.

The beneficiaries expressed their gratitude to the organizers of the action. 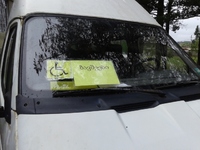 Women initiative groups of Kutaisi, Tskaltubo and Khobi conducted and action in frames of the project “Women implement inclusive approaches in the sphere of human security for building sustainable peace”. They gathered second-hand things and delivered to Tskaltubo inclusive center. During the conversation with the chairperson of the center there were discussed plans for future cooperation with the fund “Sukhumi”. Women initiative groups in future will plan conducting of similar actions. 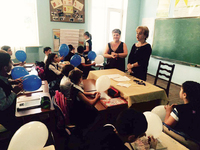 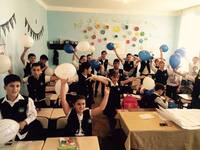 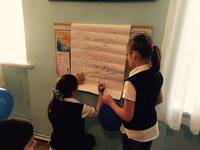 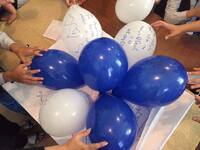 This colored, colorful, interesting lesson was held in School №1 of Tskhaltubo. The lesson was devoted to the International Day of Peace.

Young students with interest conducted "unusual" job - on colored balloons they wrote their appeals and dreams.

On October 8, there will be held parliament elections of Georgia. There are many worthy and experienced women among the candidates. The main is that they should be supported by the voters.

On October 4 for the support of women candidates the Club of Women Voters of Fund "Sukhumi" held an action.

The actions were attended by members of the Club of Women-Voters, representatives of partner NGOs and society. demonstrations were aired by media.

The protesters expressed their solidarity to women candidates, called on society for their support and recalled that equality is the power of country that more women in politics is peace, democracy and prosperity.

The project is implemented with the support  of the U.S. Embassy in Georgia
Published: Wednesday, 21 September 2016 15:42 Written by Super User Category: Actions Hits: 3036

Recently, Fund "Sukhumi" is collaborating with the charitable foundation "Karritas". With the support of the Italian missionary Loredana Monette there were held several charitable actions for beneficiaries of fund "Sukhumi" WSCs.

On September21, the International Day of Peace, 6 families in Tskhaltubo and Kutaisi received clothing, food and hygiene packages for bedridden patients.

This action is planned in the future.