Young Leaders’ School is working with young people to strengthen them and to form leadership skills. The work is carried out in 9 municipalities of Western Georgia - Kutaisi, Tskaltubo, Khoni, Terjla, Senaki, Poti, Khurcha / Koki (Zugdidi municipality), Lanchkhuti, Ozurgeti. These are information meetings about gender and domestic violence, workshops on conflictology for young people, meetings with boys, formation of a group of young trainers, trainings and various meetings with participation of young people.

On June 2, 3 and 5, online meetings were held with members of conflict management group in schools of the villages Anaklia (Zugdidi municipality), Teklati (Senaki municipality) and Kulashi (Samtredia municipality).

Pupils were familiarized with the topic of June: “Methods of Peaceful Resolution of the Conflict”. Later, this video lesson was posted on the Facebook page of the Fund “Sukhumi”.

After the meeting, the students began to prepare the tasks - video appeals, essays, paintings, as well as feedback - how the project work affected them.

The “Conversation with Mothers” was continued. The first meeting of June was held, and information on this was published on the Facebook page.

Family, harmonious relations between family members – online meetings on this topic, with members of the Youth Clubs of Lanchkhuti, Ozurgeti and the village Nabakevi (Samtredia Municipality) were held.

Intergenerational communication, the family as the main value, family as a mini model of the state –– a frank conversation on these issues was held with young people. Their visions were recorded regarding the phenomenon of family, interesting stories from their own lives. According to young people, in order to achieve psychological and economic harmony in the family it is very important to share responsibilities.

Work with the boys on the topic of “Tolerance” 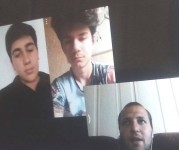 In May, the topic of online meetings with the boys was “Tolerance.” The Fund “Sukhumi” trainer contacted schools in the municipalities of Terjola, Zugdidi, Tsalenjikha, Kutaisi, Senaki, Poti, and Lanchkhuti. Online meetings were held both in groups and individually. The boys noted that this word is familiar for them, they often heard it know not so much about its meaning. Therefore, the first thing that was done during the meetings was an explanation of the essence of “tolerance”. There was a long discussion regarding whether it is possible to study and become tolerant, and how important it is to live in a tolerant society.

There was also an innovation in the work - the trainer asked several teachers to share their experience. According to the teachers, they use different methods while working with students: videos, cartoons, presentations. Gradually, they also take positive steps in terms of online learning. 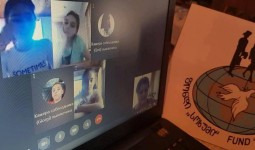 In May the work with members of conflict management groups was continued again online. On the Facebook page of the Fund “Sukhumi”, the conflict expert uploaded another video lesson on the topic: “Possible results of conflict, styles of behavior in a conflict situation”.

The online meetings were held with pupils from School number 2 of the village Pakhulani (Tsalenjikha municipality), the village Dvabzu (Ozurgeti municipality) and the village Kulashi (Samtredia municipality). They listened to a video lesson, started to record videos on the topic of conflict and COVID-19, prepared essays and drawings, as well as participating in the interesting section “Letter to a Trusted Person”.

The first letters were published on the Facebook page of the Fund “Sukhumi”.