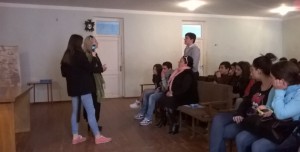 Forum-theatre of the fund “Sukhumi” conducted 6 performances in public school No 1 of Tskaltubo. The meeting was attended by 68 pupils, teachers and the head of school.

After seeing the scenes each of them was involved in the game. It was followed by active discussions. Everything was interesting and impressive.
The pupils took photos with young actors, the head of school expressed a will to open different theatric studios.
The project is implemented with the support of the organization Brot
für die Welt – Evangelischer Entwicklunsdienst (Germany)