Group and individual meetings of a lawyer 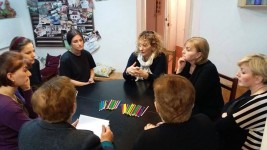 In March, group and individual meetings of the lawyer were held. On March 4, there was a meeting with a violence victim in the office of the Fund “Sukhumi”. On March 9, a group legal consultation was held in the village Tskaltubo (Tskaltubo municipality). The lawyer also met with the beneficiaries of the Fund “Sukhumi” Day Center - a cutting and sewing course. Then on-line meetings began - the lawyer gave online consultations and advice to the beneficiaries in Senaki, Khoni and Ozurgeti.

The questions were different, including the current situation, but the conversation mainly concerned the law on domestic violence, mechanisms for awarding victim status and protecting the victim from violence.