“Dashed hopes of the fire-affected population in the Gali district: Needs and response strategies” 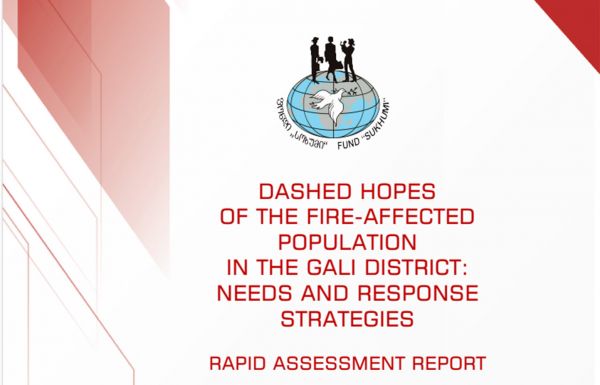 The Fund "Sukhumi" presents its new rapid assessment report – “Dashed hopes of the fire-affected population in the Gali district: Needs and response strategies”, which discusses priority needs and human security concerns of the population affected by the wildfires that broke out in January 2021 in the Gali district.

The report draws attention to the plight of the communities in Gali, who were already in dire straits as a result of the Covid-19 pandemic, and were left without proper attention and essential livelihoods following the wildfires. Two months after the wildfire, people feel forgotten, abandoned and neglected.

This Report analyzes problems and assesses needs identified as a result of the field study, as well as provides specific recommendations aimed at reducing the negative impacts of fire on the population of the Gali District and developing appropriate emergency response strategies.