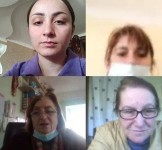 “16 active days against violence towards the women” - during this campaign, Terjola Women Support Center held a discussion in the social network “I am both a victim and a rapist”. The emphasis was made on psychological violence, which is punishable, but rapists are rarely punished because of it. The social network shows that we are not only victims, but also rapists - consciously or unconsciously. A frank discussion was devoted to this topic, which is so important for informing society.

The center also held a show-room "Do not miss the time of returning home." It was an online meeting on the complex topic of emigration. The film "Home", produced by Terjola Women Support Center, was shown, which concerns the pain of emigrants. The campaign was dedicated to the exhibition of drawings "My Family", which included young people from different schools.