Activity of Women Initiative Groups in the campaign 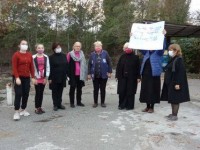 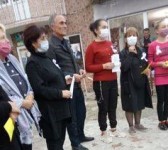 The Women Initiative Groups of the Fund "Sukhumi" have joined the 16-day international campaign against violence towards the women with various activities.

“Peace at home, peace in the world”, “Violence against women is a crime!” - such messages were voiced by the activists of the Fund "Sukhumi" during the action near the conflict line (Khurcha and Nabakevi villages of Zugdidi and Gali municipalities). Gender challenges were discussed at an online meeting in the village Pakhulani (Tsalenjikha municipality) and expressed a protest in such a way.

The project is implemented with the support of Kvinna till Kvinna,
women’s Foundation (Sweden)